Website visitor Josh Holland recently emailed us about some prints he had found that seemed to have been created by Daniel Pinkwater.

The series is called “Four Shamans for Mrs. Gelfand,” and was signed “Pinkwater ’62.” Here’s the story:

I actually came by them via the Housing Works thrift store on the Upper West side (Broadway and 96th) in NYC. My girlfriend was going to grad school at Columbia a few years ago. When I’d go visit her, I’d try to pop into the Housing Works to look for new (old) clothes. On one such occasion, I walked in the store and almost immediately saw the prints.

Right when I saw them, I knew that I had to have them. They were framed in what looked to be 60s or 70s era plain gold colored frames and were marked on the back with Triton Gallery. So when I got home to DC, I decided to have them rematted and reframed with a dark wood and new protective glass in order to breathe some new vitality into them. They are now proudly on display in my apartment and often get compliments from guests.

For awhile, I was stumped about their provenance. My initial internet meanderings yielded no results. “What the hell was the artist’s name?” However, I picked the search back up when my girlfriend’s sister was visiting. As it turns out, her boyfriend helped connect the dots. When I said that it might be “Pinkwater.” He said, “oh, like the writer?” So after a bit of delay, I decided to post the question on Daniel’s website.

I just wish there were more that I might be able to have.

Here are the prints in question: 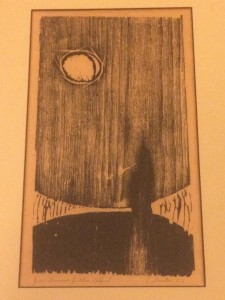 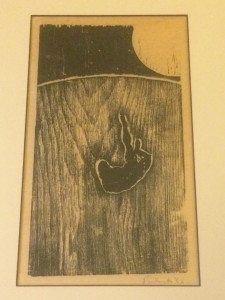 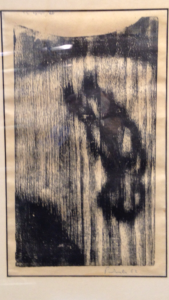 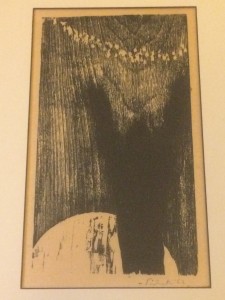 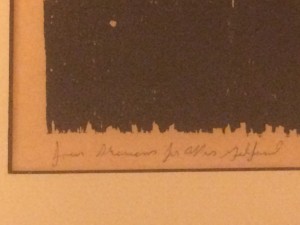 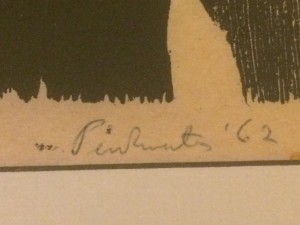 Daniel confirmed that these were, indeed, his works:

Yes, I did those prints. I took an Anthropology course that dealt with Native American culture at Bard College. Mae Ebihara Gelfand was the talented professor. I liked reading the accounts of Inuit shamans by Peter Freuchen, and made some woodcuts, probably hoping to use them to get out of writing a paper, and gave a set to Gelfand. She asked for several more sets to send to her colleagues. She was more impressed with them than I was–as I hadn’t seen many examples of Inuit art, as I since have, and didn’t know that I’d come pretty close to conveying the feeling of the thing.

Those are all the shamans I did, not counting literature. I think you have Gelfand’s personal copies, given the inscription. She wound up at Columbia I think, and I believe is deceased along with her nice husband, Marvin. Someone must have been clearing the junk out of an apartment.